How to measure the performance of your YouTube campaign

With traditional print ads, you don’t know how many people are actually viewing them. Even with pay-per-click advertising, you can view impressions but that still does not mean the ad registered with someone. According to Google, TrueView ads are “built on the promise that you’ll only pay when someone chooses to watch your video ad.” Viewers are shown ads that may be of interest based on their demographics, interests, or placements where the ad was viewed and viewers make the choice to engage with your video.

There are two different types of TrueView ads and understanding the difference is important.  With in-stream ads, they play either before or during another video on YouTube. Viewers see 5 seconds of an ad before they have the option to skip it. If they watch the full video or 30 seconds of it – whichever is longer – advertisers pay for that view. With video discovery videos, these are shown alongside other videos, in the search pages on YouTube, or other Google Display Network websites. Advertisers pay when the person clicks on the video, choosing to engage with it.

How you determine success is based on the type of TrueView ad you run as well as your goal of the campaign. A meaningful goal for most brands – especially new ones – is to increase awareness and increase the likelihood of a sale. Although the experience of consumers is not linear; when determining success, think of consumers in categories of knowing or not knowing your product/service, in the stage of weighing different options once they become familiar with brands, or taking action and buying from you versus your competitor. For viewers who are not yet aware of your brand, you may monitor views, impressions, and unique users. In the consideration stage, you will would check watch time and view-through rates. And finally the action stage is the clicks, calls, signups or sales – when people take that action to buy from you.

The main sections on the YouTube Analytics dashboard are real time metrics, watch time reports, and engagement reports.  Real Time data  is an estimated number but can give you initial insights on your recently published videos so you are not waiting several days for the initial results.  Watch time has key metrics for all campaigns because it tells you how long people view your videos on average. If you have a three minute clip that you think is very reflective of your brand and has solid messaging in it, but people only view one minute, all that work in the last two minutes of the video is irrelevant. Videos with a longer watch time are deemed by Google to be more relevant and are shown higher in search results because they indicate user retention.

However, if your watch time is low, it does not mean automatically abandoning the ad. Change the title or description of your video to be more reflective of the content. Optimize it so you attract the right audience for your clip. Use annotations in the video to make your video more interactive.  This invites people to stick with you until the end and are part of the engagement metrics described below. Experiment with the different features available with YouTube before abandoning your ad.

Engagement metrics are vital to all advertisers and are measured when people like, comment and/or share a video.  The desired action depends on the purpose of the video. If you have a short training for your product and invite user feedback, then comments are a valuable metrics. And make sure you respond to all of them – even the negative ones.  If your video is humorous, you probably want likes and shares, including shares on other channels, such as Facebook where your viewers help spread your message across the internet. The subscribers report is also valuable to see when you lost or gained people. What video were they watching when they subscribed or unsubscribed?  Dislikes are important if you receive a lot of them. In that scenario, you may want to invite comments to understand why your message did not resonant with a specific audience.

YouTube videos can be utilized well for most brands and work especially well for companies selling an experience – most of the time. Below is one where the video was not performing well, but the advertiser saw the negative numbers quickly and paused it for changes. This is a consulting business that was describing services in a three-minute clip. It could be the clip was too long or the clip was just boring. You’ll see that only 1% played the video to the end.

It gets even worse. The average view duration for this video was less with YouTube advertising (15 seconds) than with organic traffic from external websites (1 minute 2 seconds). So there seemed to be an issue with the content and the messaging. That’s why it’s important to catch these things early. 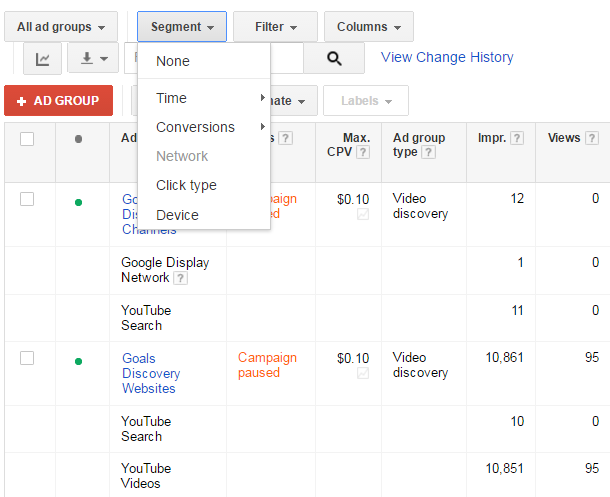 The next few screens are for a business selling outdoor adventures. They are selling an active experience so showing people what to expect was a good strategy.

This was targeted to women under 50 years old and set up as an in-stream ad. The initial thumbnail seemed to be engaging since the view rate was 27%. And 10 clicks to the website was also a good start. Remember there are multiple metrics to consider in measuring performance. Viewing the video is good but a call-to-action that’s interesting enough for a website visit is even better.

The next screen is for the same company with additional metrics. The number of earned views is five, meaning that as a result of watching this initial clip, there were five views on other videos for this channel. We’d like to see that number be higher so perhaps a larger variety of videos on this channel would help.

Also note the video was not played to the end by most people, with only 27% of viewers making it through the whole thing. As more data is gathered, we can watch the video with a critical eye to see what the message is at the 25%, 50%, and 75% mark. It could be that the video’s core message was presented very early on without giving a reason for people to watch the full clip. So the length of future videos can be shorter.  The thumbnail and description may have drawn people in but not kept them engaged.

It is difficult to set an industry benchmark for ad performance for videos. It varies so much and you do not know the KPIs of your competitor. Instead, set your own benchmarks for what success looks like for you. Compare your YouTube campaigns to past campaigns on other channels.

Like with all digital marketing metrics, remember that metrics are only numbers. You are the one who knows your brand’s goals and KPIs that result in successful campaigns. With almost one-third of all people on the internet using YouTube, it is no longer optional for brands to use video in their marketing.

Tina Arnoldi is Analytics and AdWords Qualified and one of the few people in the United States recognized as a Google Developer Expert(GDE) for marketing. Her agency, 360 Internet Strategy, is also a Google Partner. You can learn more about her on LinkedIn