Since adopting the HubSpot connector from Supermetrics, Gravital has reduced their time spent on client reporting by 53%

Gravital is a results-driven performance marketing agency and HubSpot partner based in San Juan, Puerto Rico.

Maricarmen Vargas is Digital Account Manager and a big part of her role is working closely with the agency’s clients to report on performance and identify growth opportunities based on the numbers.

In this customer success story, we hear how Gravital‘s client reporting has evolved over three phases to achieve 100% reporting automation, save 53% of time on client reporting, and focus more on client strategy & improving bottom line results through this time saving on low-impact manual tasks.

“I was spending two hours per month per client on creating reports and we were wasting a lot of time pasting screenshots into PowerPoints. This is when I started looking at ways to improve our client reporting.”

One of the biggest challenges facing Mari and her team was creating client reports. They quickly found themselves in a situation where they spent more time on collecting data and putting it together in reports compared to analyzing it to pinpoint insights. Mari says, “Reporting has always been a challenge for marketers and most agencies don’t have the luxury of having a data analyst in-house. This means Account Managers need to learn the data & analytics side on top of project management, sales, and account management. I was spending about two hours per month per client on creating reports, and we felt we were wasting a lot of time just pasting data and screenshots into PowerPoints. This is when I started looking at ways to improve our client reporting.”

For Gravital, this improvement has evolved across three phases:

“I’d tried building these reports in Databox but had struggled due to its limited flexibility. But once we had everything set up with Supermetrics in Data Studio, this part of the process became fully automated.”

To simplify their reporting processes and make it easy for clients to understand how their marketing is performing, the Gravital team wanted to make two reports for each client. In order to save precious time, they also wanted to automate the process as much as possible. As a performance marketing agency and HubSpot partner, this meant combining HubSpot data with ad & web data from platforms like LinkedIn, Facebook, Google Ads, and Google Analytics. The reports would include various KPIs measuring progress for the current month versus their goal, including:

While combining HubSpot data with other marketing data sounds pretty simple, it turned out to be a lot harder in practice.

The first of the two reports Mari wanted to create was a live dashboard with real-time updates on overall marketing performance. Mari says, “We built these dashboards in Google Data Studio with Supermetrics where we’d combine various Google Analytics campaign parameters with LinkedIn & Facebook ad data.  I’d tried building these in Databox previously but had struggled due to the limited flexibility of their tool. But once we had everything set up with Supermetrics in Data Studio, this part of the process became fully automated.”

The second report Mari created was a one-pager PDF that showed all the results from the previous month. “These one-pagers are sent to all our clients, giving them all their previous month’s marketing results in their hands. Whereas the Data Studio dashboard gives a real-time update, this one consolidated everything from the previous month, which also guides our focus for the upcoming month.”

However, this process still required manual work. The issue lay in blending data from various HubSpot portals into Gravital’s client reports. Mari says, “In order to create complete reports, we still needed to manually add data from HubSpot. This took an additional 15-20 minutes per client, which quickly added up to a significant chunk of time that could be better spent.”

Despite reaching 70% reporting automation, the team still needed to create client reports natively within HubSpot since they couldn’t pull that data into Google Sheets & Google Data Studio. This is where they ran into some other limitations when it came to reporting on the HubSpot side of performance. Mari explains, “We’d often run into challenges when creating reports that stitched together website & traffic analytics with lifecycle numbers. Not all our clients have their website and blogs inside of hubspot, which meant some of our in-built HubSpot reports were missing pieces of data. I also experimented with some sales reporting as I wanted to create some customized dashboards showing the performance of different sales reps, but I couldn’t get exactly what I was after.”

“Supermetrics has given us the opportunity to develop ideas for our business that we previously thought were difficult. It really gives you the tools to be creative and think outside the box.”

The missing piece of Gravital’s reporting puzzle was a HubSpot connector from Supermetrics, which was something Mari had been eagerly waiting for. “I was following different threads on the Supermetrics support pages where upcoming connectors were being discussed. I even bookmarked the thread about the HubSpot connector and enabled notifications so I could keep up to date on progress. To be honest, we even considered hiring someone to build our own custom integration since we were in such need of blending HubSpot data with our other marketing data. But then I got that first email announcing the new Supermetrics connector for HubSpot and I was super excited!”

The launch of Supermetrics for HubSpot helped Mari and the Gravital team to finally close their reporting loop, an internal project they had named Operation Close The Loop. This meant Mari and the team could combine all their client’s marketing & sales data from all their different platforms and HubSpot portals into one centralized location for analysis and reporting. 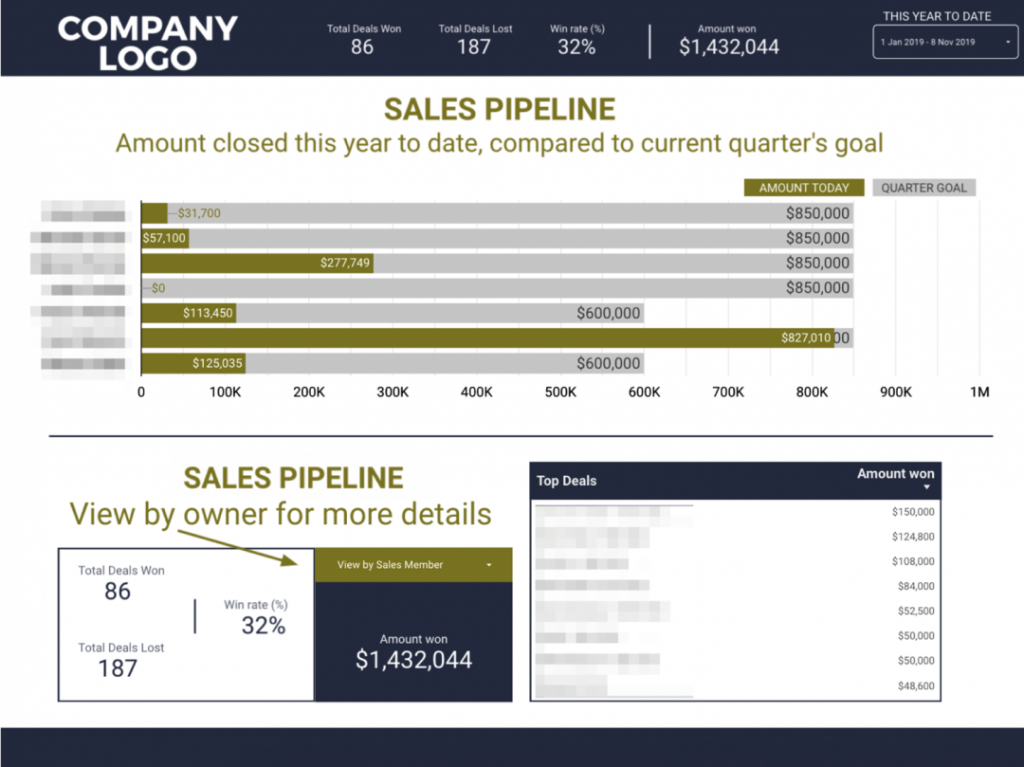 Mari explains, “The first thing I did was to replace all the GA events we had within HubSpot form buttons, since we didn’t need them anymore. Then I started adding the missing HubSpot metrics in our client reports—finally we didn’t need to add those manually.”

The addition of HubSpot to the Supermetrics connector family meant Mari and the Gravital team could finally automate 100% of their client reporting. Mari says that, “Now we automate the entire client reporting process using various Supermetrics connectors, including HubSpot. But that’s not the only value we get since this has enabled us to derive better insights from all our data. On top of the basic 100% automation is the opportunity to get new ideas. For example, one client recently asked how her sales reps were doing against their goals. This company had two offerings, with two different sales pipelines, and a relatively complex sales funnel. In the past it would have been pretty complex – or near impossible – to create due to their set up, but then I realized I now had the tools to get that info. I said I’ll look into it, and even though I wasn’t able to create this specific report in HubSpot, I was able to use Supermetrics to pull the needed data from HubSpot into Google Sheets, mix it with data from other platforms, and create the report in Google Data Studio. Supermetrics has given us the opportunity to develop ideas for our business that we previously thought were difficult. It really gives you the tools to be creative and think outside the box.”

On the impact this has had for Gravital and their services, Mari says that, “Supermetrics has really opened the door for more opportunities and you can answer every question with data. In some cases I might need a few weeks to figure it out, but I have the tools to actually do it and answer very specific questions clients have. Now I’m better able to serve our clients and meet their needs.”

“Supermetrics has changed our entire business model. We’ve scaled up to be something beyond just marketing or digital marketing, but actually data-driven performance marketing.”

The impact & next steps

Since taking Supermetrics into use, Gravital has reduced the amount of time they spend on reporting by over 50%. Mari says, “We analyzed our time tracking data and compared our Q3 numbers with Q1 and Q2. We found that since using Supermetrics, we’ve saved around 53% of reporting hours during Q3.”

On the additional impact Supermetrics has had for Gravital, Mari says that, “While the internal time & cost savings are very valuable, the most important thing is that it raises both the actual and perceived value of our services. Occasionally there is a learning curve for clients since we need to onboard them and show them how to read data and draw insights based on the numbers, but it raises the confidence and trust they have in us. This is gained based on past experiences and having nothing to hide. We want to be really transparent with our clients as that builds trust, and Supermetrics helps us be more open and improve visibility.”

In terms of next steps and where the Gravital team will take their client reporting in future, Mari says that, “Operation Close The Loop was only the latest iteration of our complete reporting project. As we move our agency model to performance marketing, Close The Loop means we can now clearly connect campaigns to bottom line impact. In terms of the next phase, all I can say is that it’s going to be way cooler and that it will be built using Supermetrics.”

And on the impact Supermetrics has had for Gravital’s business as a whole, Mari concludes that, “When I think about it, Supermetrics has changed our entire business model. Now, we’re able to really focus on performance. We’ve scaled up to be something beyond just marketing or digital marketing, but actually data-driven performance marketing.”

Stay tuned for how this story unfolds, we’ll be sure to share the next chapter right here on Supermetrics.

Want to automate and improve your HubSpot reporting like Mari & Gravital? Start your free trial of Supermetrics today!