CrediNord is a leading online business lender in the Nordic countries.

Before Supermetrics, their marketing team manually downloaded data from different channels and combined them in multiple reports.

Tired of the situation and unable to understand the impact of their marketing activities, CrediNord decided to move to Amazon S3 for storing data and chose Supermetrics as a data pipeline provider.

CrediNord is one of the leading online business lenders in the Nordic operating in Finland, Sweden, Denmark, and the Netherlands. The company provides small and medium-sized businesses with fast and flexible business loans online.

Robert Karjalainen works at CrediNord as their Director of Marketing. With his marketing team, Robert is responsible for building brand awareness and bringing in sales across different channels. A big part of his job is analyzing and reporting on the performance of their marketing activities. 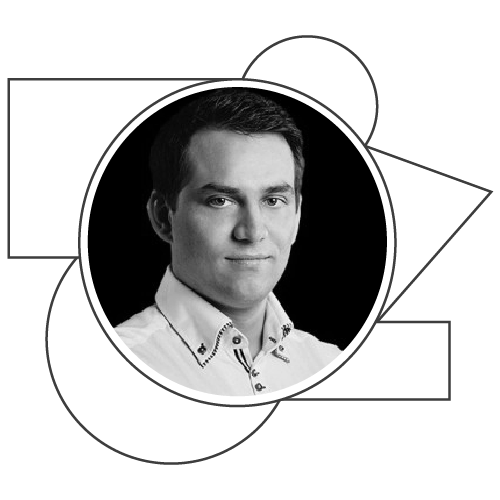 “We run ads on different channels, each of which provides us with different data. Without blending data from these sources together, it was impossible to understand the impact of our marketing activities. That’s why we turned to Supermetrics for help.”

Turning data into a competitive advantage

Operating in the financial services industry, especially in the online business loan market, Robert and his team understand that they’re competing against larger organizations with bigger budgets and resources. That’s why they decided to make data one of their competitive advantages.

Robert says, “The Nordics’ market for online business loans is a fast-growing segment and big banks are playing in the field. They are well funded and have professionals on board. We realize that we need to make data our secret weapon to win the game. And this starts with improving our marketing reporting.”

He continues, “It was a challenge for us at the beginning. We’re running campaigns on four to five different channels. The data was scattered across platforms. It was difficult to make sense of all that data and see the impact of our marketing operations.”

“Although the Nordics’ market for online business loans isn’t huge, big banks are playing in the field. They have more funds and professionals on board. We realize that we need to make data our secret weapon to win the game. And this starts with improving our marketing reporting.”

The team decided to build a data lake in Amazon S3 because they wanted to centralize and gain control over their marketing data. At the same time, they were also looking for a data pipeline that would streamline the data transfer process to Amazon S3.

After carefully weighing up different vendors, they chose Supermetrics. Victor Ström, who took the lead in finding the right vendor, says, “I’ve heard of Supermetrics for years already. Supermetrics is quite well-known in the data analytics category. We took a trial for Amazon S3, and the setup was effortless and straightforward. We also looked at Funnel, but since the Supermetrics integrations worked perfectly well, we didn’t spend much time with the Funnel trial. It was a no-brainer.” 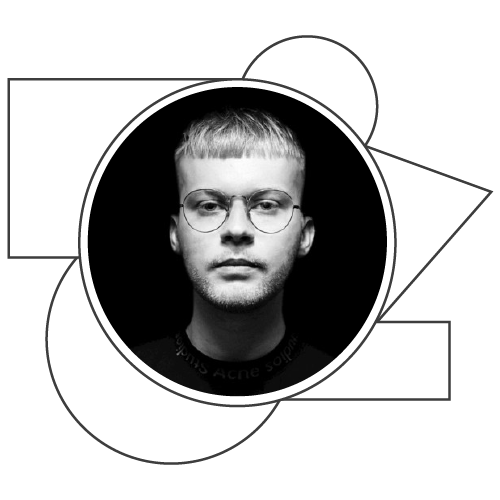 “I’ve heard of Supermetrics for years already. Supermetrics is quite well-known in the data analytics category. We took a trial for Amazon S3, and the setup was effortless and straightforward. We also looked at Funnel, but since the Supermetrics integrations worked perfectly well, we didn’t spend much time with the Funnel trial. It was a no-brainer.”

Building a robust and scalable data infrastructure to improve decision-making

Before Supermetrics, Robert and Victor had to do a lot of manual work to create their marketing reports. Robert explains, “We had to go to Facebook, Google, and other platforms to download the data. Since each platform has a different way of structuring data, we had to clean, reformat and combine the data in our manual reports. It was a heavy process.”

To get Supermetrics for Amazon S3 up and running and build an automated marketing dashboard in QlikSense, Robert and his team enlisted the help of Supermetrics Professional Services. Bartosz Schneider, the Lead Consultant at Supermetrics, was heading up the project.

Bartosz says, “Robert and Victor came to us with a very clear goal — improving their decision-making process in regards to marketing with data. It was clear that their ideas and visions required a robust and scalable data infrastructure. Something that scattered manual reports across different spreadsheets would not be able to support. Getting their marketing data into a data lake sets them up for success with a long-term perspective”.

After agreeing on the needs and expected outcomes of the dashboard, the first step was moving CrediNord’s marketing data into Amazon S3, including:

Bartosz could easily set up the data transfer to Amazon S3 and create a custom schema to extract the exact metric and dimensions needed using Supermetrics.

Bartosz says, “Since the CrediNord team used custom goals in Google Analytics heavily to track their sales funnel, a standard extraction schema wouldn’t be able to cover their reporting needs. For that reason, I designed and implemented customized schemas in the Supermetrics Query Manager to solve the problem.”

With the raw data ready in Amazon S3, Bartosz started loading, cleaning, and modeling the data in QlikSense. To make it easy for maintaining and transforming the data, he split the data load script into five sections.

In this section, the load script standardized the number and date format. It also defined some variables where Facebook Ads and Google Ads data are loaded from Amazon S3.

Here, the load scripts prepared the raw data for blending, including:

The next step was implementing the mapping rules for CrediNord’s operational custom marketing channel groupings. First, Bartosz created initial mappings based on the ‘Source’ dimension— because Robert and Victor wanted that particular dataset to represent a specific segment of their marketing activities. Unwanted values of ‘Source’ were replaced with null-values in this dimension.

Second, he created the second custom dimension, ‘Channel grouping’, and implemented the mapping rules based on a set of rules using the previously created ‘Combined_source’ dimension along with additional input from other fields in the data.

The load script created a table with goal completion data from Google Analytics using the outer join. This way, the resulting table would contain 100% of both input tables so that the grand totals in the report are the same values as were exported from the sources.

The last section unpivoted the joined table so that ‘Goals’ becomes its own column. This was required for some of the graphs in CrediNord’s reporting dashboard.

In the resulting table, the ‘Goal’ column had all the goal completion values as dimensions. This is used mainly for the report sheet — which shows the conversion rates and cost breakdown by funnel stage. The unpivot was achieved using the ‘CrossTable’ function in Qlik.

The final result of the ETL process was a reporting layer with two tables. 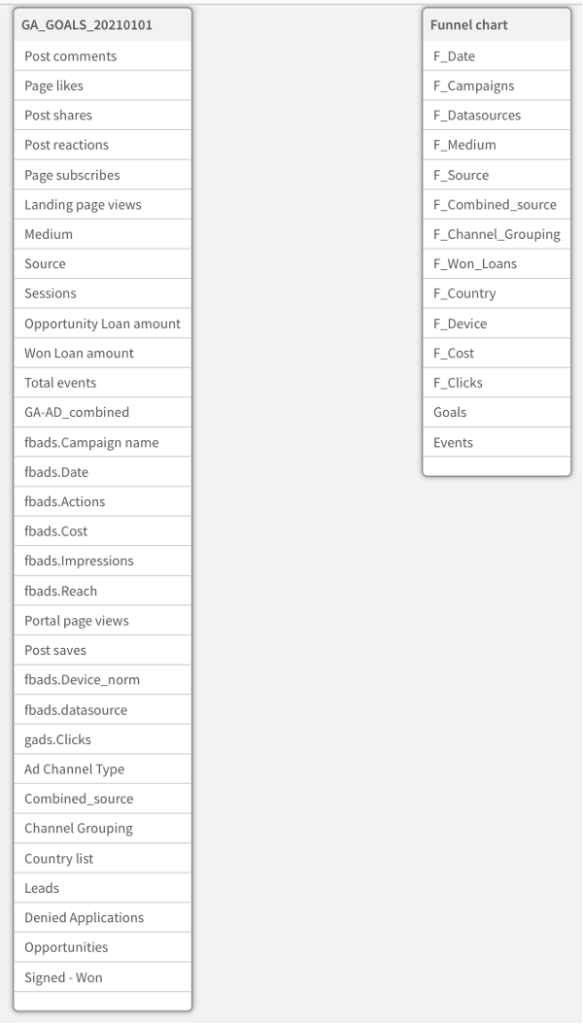 Once the data model was ready, Bartosz started calculating the KPIs and designing the dashboard. 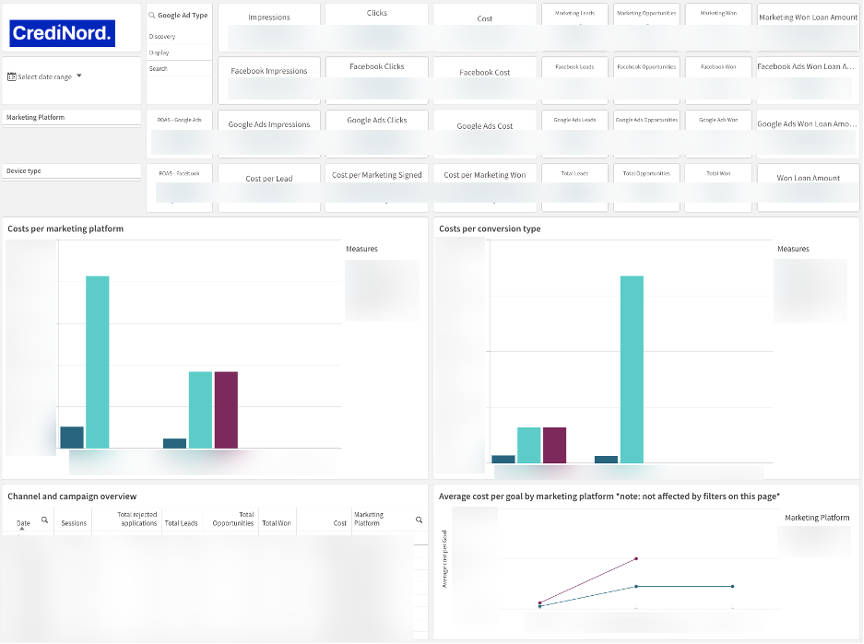 Additionally, Robert often presents this page to the management team to show the impact of marketing on the business. He says, “For the management team, they are not interested in knowing which creative works best. They want to see the real business results driven by marketing actions. And the marketing costs page serves this need. On the other pages, we have more technical, drill-down data that helps us optimize our performance. ” 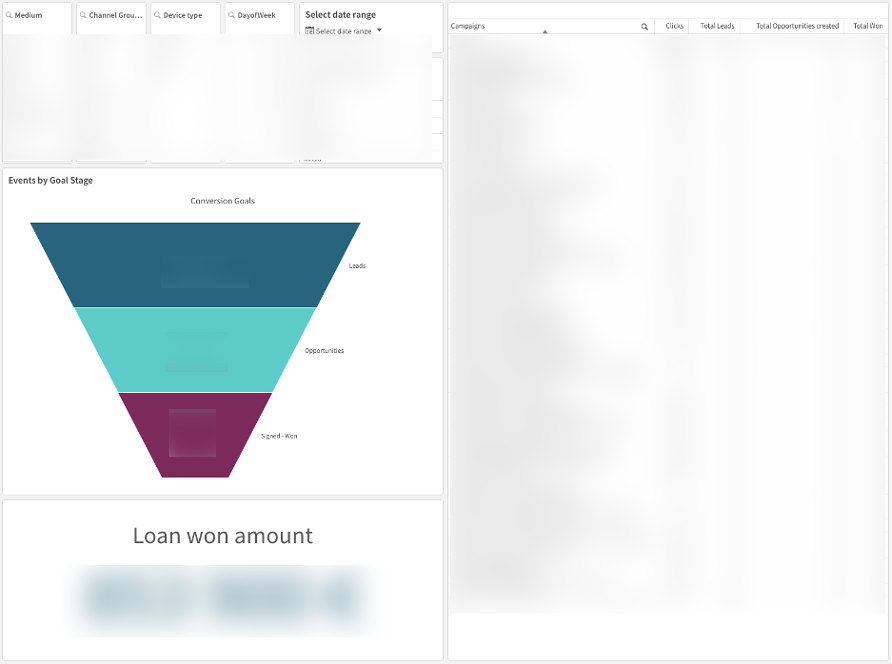 The ‘Marketing analytics funnel’ visualizes CrediNord’s sales funnel into three stages: lead, opportunity, and won. Additionally, there’s a table on the right side showing the performance of each campaign. From here, they can easily see which campaigns are driving the most conversions.

The next page focuses on Facebook Ads performance. From here, Robert and his team can find the scorecards representing the key Facebook Ads metrics and a table with a campaign performance breakdown.

This page summarizes the performance of Google Ads. The scorecards show the most important metrics in Google Ads, including clicks, impressions, CTRs, and costs. Finally, the table at the bottom provides details on each Google Ads campaign.

Robert explains, “It’s important for us to understand the impact of our marketing investment on sales. We want to say, ‘we increased our spending this month by X%, and this is how much we’ve got in return.’ Especially, with the B2B sales cycle being long and complicated, the dashboard shows us how someone became a lead and ultimately turned into a customer.”

He continues, “Nothing can ever beat having an automated dashboard with all your data. Since the dashboard is refreshed every 24 hours, we’ll always have fresh data to work with. We were able to build a dashboard with clean and relevant data that the management team — who may not be familiar with marketing jargon — can easily interpret.”

“Nothing can ever beat having an automated dashboard with all your data. Since the dashboard is refreshed every 24 hours, we’ll always have fresh data to work with. We were able to build a dashboard with clean and relevant data that the management team — who may not be familiar with marketing jargon — can easily interpret.”

The impact of Supermetrics and the future of reporting at CrediNord

Supermetrics helps CrediNord eliminate the data chaos and gain a better understanding of their marketing performance.

With all marketing data in one place, they’re now able to make better decisions and communicate the value of marketing to the management team. Robert says, “Supermetrics enables us to make data-driven decisions faster and more efficiently. We have a better understanding of our performance. The data doesn’t spread all over spreadsheets. It’s now in one single place.”

“Supermetrics enables us to make data-driven decisions faster and more efficiently. We have a better understanding of our performance. The data doesn’t spread all over spreadsheets. It’s now in one single place.”

Robert continues, “We had to create the report for the management team once a week. That was at least 15 hours of manual data processing and crunching per month. And there are so many things you can do in 15 hours. Supermetrics helps us get back the time for analyzing and optimizing our performance.”

As for the future, Robert wants to bring CRM, social, and regional data into Amazon S3. With the help of Supermetrics, he’s optimistic about this project. Robert says, “The more we grow, the more complex our data model will become. We want to blend data from more sources and more countries. We want to build a country comparison report and see our ROAS in different countries weekly, monthly, and quarterly. When the project starts, I’m happy that we can count on Supermetrics and Bartosz to help us achieve what we need to succeed.”

Want to get rid of data chaos like the CrediNord team? Start your free trial of Supermetrics for Amazon S3 or contact our sales team to discuss more.

If you'd like to see how your business can benefit from Supermetrics for Amazon S3 or any of our other products, book a call with our sales team.