Announcing the Supermetrics Twitter Premium connector: measure the organic performance of your tweets

With this new integration, you can analyze your organic activities on Twitter or compare them with other social networks’ performance stats. Continue reading to learn more about this connector and don’t forget to try out our free, plug-and-play reporting template for Google Data Studio.

Why should you have Supermetrics Twitter Premium connector in your toolkit?

Interested in giving Twitter Premium a spin but don’t know where to start? We’ve put together a bunch of ideas for your first reports with this connector.

What kind of reports can I build with Twitter Premium connector?

Content analysis report: what kind of messaging resonates with my audience?

Twitter Premium will help you put together a comprehensive content analysis report to measure the effectiveness of your tweets. Monitoring each tweet’s impressions and engagement metrics will help identify which messaging resonates with your audience.
In addition, you can dive deeper into individual organic performance of each tweet, to identify the type of content that your audience finds most engaging. For example, you can find out that tweets promoting YouTube videos get more impressions than others, therefore you might want to invest into video content more.

Break down your tweets and analyze what works

Twitter’s hashtags and mentions are a valuable tool for marketers as they help connect tweet content to bigger trends. When tweets are connected to a popular theme, they can be easily found. And when your tweets are easy to find, they are more likely to get more likes, retweets and comments.

If you want to make the most out of hashtags and mentions, you need to analyze which ones suit your content best.

Our Twitter Premium connector allows you to analyze each tweet at a granular level. Every tweet consists of multiple components: text, hashtags, mentions, links, and images/videos. By analyzing each of these components separately, you’ll be able to identify which particular hashtag or profile mention grabs the attention of your audience. Then, after you’ve identified the best performing components, it’ll be easier to come up with great content ideas for your future tweets.

For example, we have noticed that hashtags #PPC and #template get considerably more engagements compared to other hashtags, and that’s why we’ve decided to feature more PPC templates in our tweets in the future.

Also, hashtags are a great way to check the audience’s interest towards a particular topic. We’ve noticed that tweets with hashtags #GoogleBigQuery and #Datawarehouse got a good engagement rate, which proves that we should feature more content on this topic.

A tweet’s lifespan is only 18 minutes, which makes it the shortest-living post compared to other social networks. In practice, this means that tweeting at the right time can make a difference between making a tweet viral or turning it into an update no one will notice.

By analyzing organic impressions and engagement rate over time, you can see when is the best time to post and schedule your updates accordingly.

Twitter Premium allows you to monitor your followers, organic impressions, and engagement data to help you see how you should adjust your strategy.

For example, if you have a lot of followers, but low impression and engagement numbers, introducing more conversation-driving content might be a good idea. In case your tweets have high engagement and low impressions, consider changing your posting schedule.

Comparing your paid and organic initiatives’ performance on Twitter

By combining data from Twitter Ads together with metrics reported with Twitter Premium you can see how your organic efforts are performing against paid promotion. There are a number of tactics you could try to improve your performance on Twitter.

For example, in case some of your tweets have had growing impressions, it might be a good idea to start promoting them to broaden the audience reach. After the paid campaigns start running, you have to constantly monitor their conversion rate compared to organic tweets’ performance to see whether the ROI is significant enough to continue spending dollars on these campaigns.

Another scenario is if some content has been performing well both in the form of organic and promoted tweet, you could consider reducing the budget of your paid campaign. Additionally, in case a particular theme or topic are performing well as paid campaigns you might want to reinforce them in your organic tweets.

Comparing organic tweets’ results with Twitter Ads campaigns or promoted tweets performance will help you understand how much value you are getting for your dollars.

After you’ve completed this analysis, you’ll be able to measure the ROI of your paid ads better, and allocate the budget in a smarter way.

If you’re using Data Studio, make sure you try out our free plug-and-play Twitter Premium reporting template, which will give you a good overview of your Twitter profile’s organic performance. 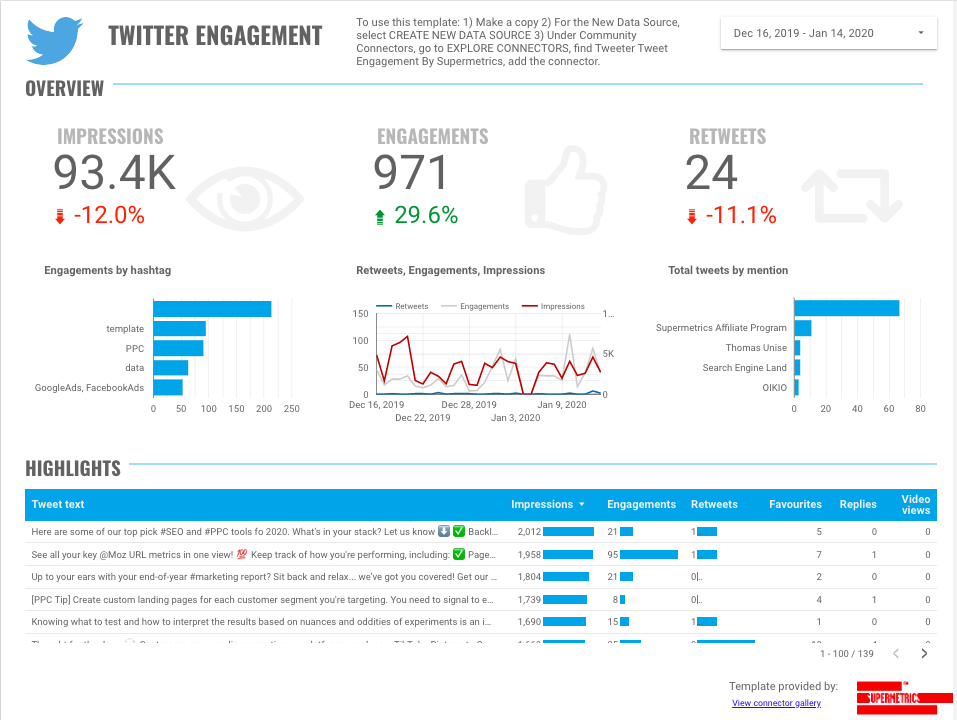 At the top of the dashboard, you’ll see the number of impressions, engagements, and retweets. Below that, you can see trendlines of these metrics, your most engaging hashtags, and total tweets by mention.

The highlights section shows your top performing tweets by impressions alongside other key metrics.

To get the template, first create a Twitter Premium data source and add it to an empty report. The query type should be “Twitter engagements”. Additionally, you should include retweets and replies by selecting “yes” from the drop down menus. After you have created the data source, open the template file and follow the instructions in the header.

If you haven’t tried out Supermetrics, you can easily start a free 14-day trial here. Twitter Premium connector is available for Supermetrics for Google Sheets, Data Studio and Excel.

At an additional cost, we can also further develop this connector to include the following functions: